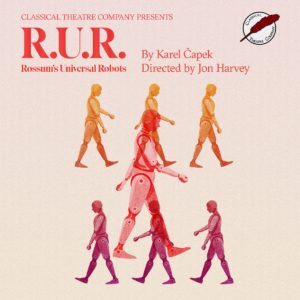 The second of the trio of local professional premieres for the season will be R.U.R. by Karel Čapek. Subtitled Rossum’s Universal Robots, this Czech play which celebrated its 100th anniversary on January 25, 2021. It explores the very nature of life as the characters in the play have created robots – indeed, the play is credited with inventing the word “robot” – to perform their labor for them. The story follows the human characters and their relationship with their fabricated servants as it changes over the course of several decades.

“Čapek’s play is way ahead of its time,” says Johnston. “You can see exactly how Ray Bradbury, Isaac Asimov, Rod Serling, and others of their ilk were influenced by this play.”

Directed by CTC Company Artist Jon Harvey, who last directed at CTC with the chilling Strindberg horror play, The Ghost Sonata. His other work at CTC includes sound design for numerous productions, most recently performing and designing sound for Peer Gynt.