Home Events The War of the Worlds

The War of the Worlds 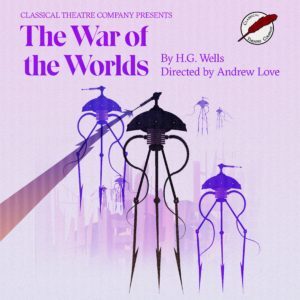 Arguably H.G. Wells’ most enduring story, The War of the Worlds, first published in its entirety in 1898, is a science-fiction tale of planetary invasion by creatures from Mars. Famous for his explorations into human nature through the fantastical, Wells’ novel takes aim at the imperialism which was so prevalent at the time. In the 120 years since its publication, The War of the Worlds has been turned into numerous films, comic books, television series, and perhaps most famously, a 1938 radio play by Orson Welles.

“This story has persevered because, aside from its basic humanity, it speaks to generation after generation,” says CTC Executive Artistic Director, John Johnston. “Whether it’s natives in Tasmania in the 1890s, Communists in the 1950s, or Latinx or Muslim immigrants in the 2010s, this story remains relevant. The branding and fear of ‘The Other’ is a trend that is always in play, I’m sad to say.”

Directed by CTC Company Artist Andrew Love, whose work for the company has included directing and performing in readings of William Shakespeare’s Star Wars, A Classical Christmas, and A Classical Fright. He has also appeared in Doctor Faustus, The Ghost Sonata, The Speckled Band: An Adventure of Sherlock Holmes, The Return of Sherlock Holmes, Henry V, and most recently could be seen as Old Peer Gynt in Peer Gynt.